Drones could provide extra eye in the sky for emergency services

Drones could be used to help emergency services deal with traffic incidents, after their use was investigated in the West Midlands.

The region was one of just five in the UK selected to participate in the Flying High Challenge, organised by innovation foundation Nesta’s Challenge Prize Centre in partnership with Innovate UK.

Drone technology is here to stay. The Nesta challenge sought to find ways drones could benefit safety and the public

Over the past six months, the challenge sought to investigate ways drone technology could be harnessed to benefit safety and the public. It was not a practical trial – rather, the idea was investigated based on data analysis, technical knowledge and expertise from the emergency services.

“The technology is out there, and is only going to become more popular. This is the sort of advanced technology which the West Midlands can excel at developing and the Nesta challenge presented a unique opportunity to consider how drones can be used for the benefit of the public in the UK.

“We were particularly interested to investigate how the technology could help the emergency services. Working with universities, West Midlands Police and the West Midlands Fire Service, we were able to examine how drones could be used in an emergency situation. The findings suggest drones could help emergency services prior to their arrival on scene, helping them quickly analyse what they see to allocate the right resources and response.”

The drones could also help to ensure motorways and roads are cleared and reopened more quickly following an incident.

Along with the West Midlands, London, Bradford, Preston and Southampton also took part in the challenge. They explored the use of drones for medical deliveries, construction and regeneration projects and fire emergency responses.

Tris Dyson, executive director of the Challenge Prize Centre, explained: “The first step in Flying High has been to better understand what drones’ place in our skies might be, to find out what challenges lie in store, to assess the benefits to cities and the people who live in them, and to start a much-needed conversation to build a shared view of this future.

“What should come next is a plan that takes the vision of cities, public service and citizens, and frames them as challenges to be actively solved.”

The full report is available at www.flyinghighchallenge.org 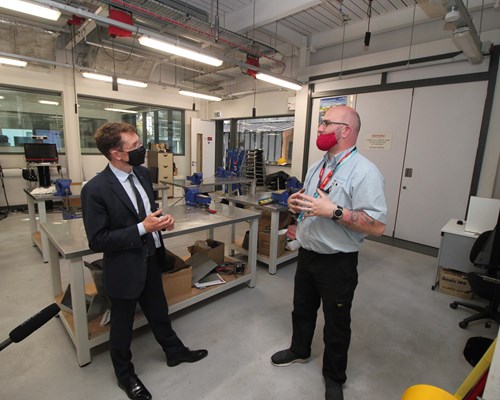