A Midland Metro tram is in Spain to be fitted with hi-tech batteries allowing it to run without the need for overhead power cables.

Tram 18 was split in two and loaded on to flatbed lorries to make the journey from the Metro depot in Wednesbury to the factory in Zaragoza, Spain, where it was made.

Tram manufacturer CAF will then fit the Urbos 3 with two lithium ion cells and undertake exhaustive tests before returning it to the UK in the autumn.

Further tests will then be carried out at the Metro depot before work begins there on fitting out the rest of the 21 tram fleet.

The Midland Metro will be the first commercial tram system in the UK to have catenary-free running, allowing the trams to operate over short distances without the need for overhead cables and equipment.

This will protect architecturally sensitive areas and prevent the need for potentially disruptive and expensive installation works.

The batteries have been commissioned by the West Midlands Combined Authority (WMCA) which owns the Midland Metro system.

Cllr Roger Horton, lead member for rail and Metro on the WMCA’s transport delivery committee, said: “It’s a major milestone for the Metro as it will be the first system in the UK to have catenary-free running.

“Battery technology is now so developed we can use it to get the tram through sensitive areas and overcome what would otherwise be expensive infrastructure works.

“This has got be good news as the Midland Metro continues to expand and provide an effective alternative to the private car, helping to ease congestion and support economic growth.”

The total cost of fitting out the fleet will be a one-off sum of £15.5m but will save £9.24m on infrastructure costs on the first four extensions alone.

Further infrastructure savings would be made as future proposed extensions, such as to Birmingham Airport, take place.

The batteries will also remove the need for overhead lines and equipment which would have marred the architecturally sensitive area around Birmingham’s historic town hall in Victoria Square.

There are four sections identified in the future network extensions for catenary-free running:

The proposed Wednesbury to Brierley Hill extension is also being evaluated to identify catenary-free sections.

Urbos 3 trams already run catenary-free along some sections of the tram networks in the Spanish cities of Zaragoza, Seville and Cadiz but use supercapacitors to provide on-board energy storage.

However these would be unsuitable for trams using the extension being built from New Street to Centenary Square, because of the steep hill on Pinfold Street leading into Victoria Square.

The newly available lithium ion batteries are now robust enough to handle the gradients and can be fitted to the fleet in time for the opening of the Centenary Square extension.

The batteries will be fixed on the tram roof and recharged by overhead lines along other parts of the route.

For video footage of the tram being loaded on to the lorry go to https://youtu.be/18wCv0XRM3o 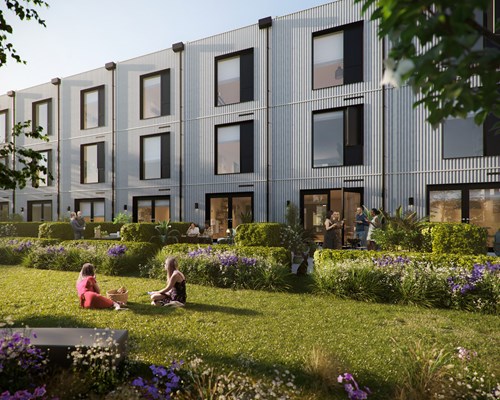