An unsung hero who helped set up Birmingham’s only permanent night shelter has been given the lifetime achievement accolade in the Mayor of the West Midlands’ Community Champions awards.

Sean Flynn was chosen by the judges for his tireless work spanning more than four decades. 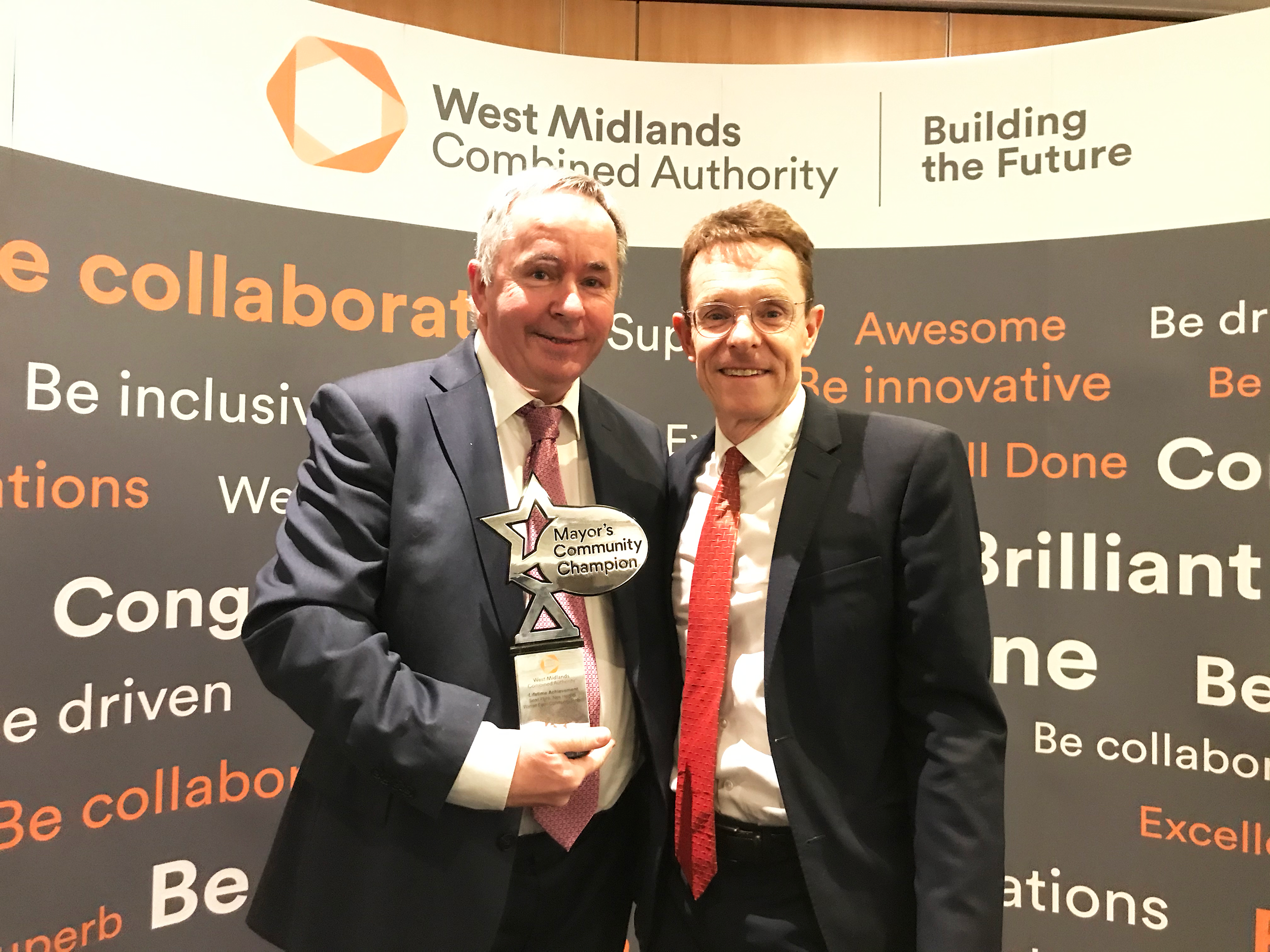 Sean Flynn and Andy Street, the Mayor of the West Midlands

The honours highlight the unsung heroes of the West Midlands who are making a difference to other people’s lives.

Andy Street, the Mayor of the West Midlands, said: “Across the West Midlands we have some brilliant community champions who work tirelessly and selflessly to improve the lives of others without any recognition. So, I was delighted to be able to hold a special night to thank these unsung heroes.

“A region is only as strong as the people living and working in it, and I truly believe here in the West Midlands we have the best region in the world. A big congratulations to the winners and all those nominated.”

Sean’s long history of volunteering started at the age of 18 and his philosophy throughout is to “treat others how you would like to be treated”.

Through his volunteering with the charity Caritas, Sean was involved with the setting up of Tabor House, Birmingham’s only permanent night shelter for people experiencing homelessness.

In 2003, Sean along with members of Christ the King parish in Kingstanding started New Heights, Warren Farm Community Project. Under Sean’s direction and leadership, New Heights offers a variety of activities and support to local people.

The awards give people in the WMCA area the chance to nominate someone who has made a significant contribution to their area.

Cllr Brigid Jones, Deputy Leader of Birmingham City Council and WMCA portfolio holder for inclusive communities added: “These awards shine a light on the wide-ranging community work that is taking place in the West Midlands.

“We applaud the selfless work of all these individuals who strive to improve the lives and wellbeing of others without expecting any reward or recognition for themselves.”

The awards were presented during a ceremony in Birmingham city centre on 5 March.

Cross Regional
West Midlands Fire Service
West Midlands Fire Service (WMFS) won for its work as part of the national resilience arrangements, involving services across the country helping each other during big emergencies, aiding local communities affected by a major event. During 2019 crews from WMFS responded to three such deployments outside of their area in Derbyshire, Lincolnshire and most recently the floods in South Yorkshire.

Intergenerational
Candy Woods - West Midlands Fire Service, Ladywood, Birmingham
After losing her home and belongings following a volcano eruption on the Caribbean island of Montserrat in 1997, Candy has had a desire to give something back and to help others who are less fortunate than herself.

In 2003 Candy launched the Winter Coat Appeal, which has now helped thousands of people in need. Ladywood Community Fire Station has acted as a collection and distribution centre, working with Candy to identify and work with vulnerable residents helping to make the community safer, stronger and healthier.

Social Mobility
Shamsun Chowdhury - Legacy WM, Birmingham
Shamsun has been supporting the communities of Lozells, Aston and Handsworth for the last 20 years. She works with more than 100 migrant women and children supporting them with integration, connecting them with services on offer and friendship networks to avoid isolation.

Interfaith
Imam Mohammed Hammad - Iqra Learning Centre, Coventry
Ever since Mohammed Hammad joined Iqra Learning Centre in Chapelfields, Coventry, the dynamics between Muslims and the broader community has drastically changed for the better. He has set up initiatives such as the Coventry winter night shelter, providing first line support for homeless people across Coventry and five-a-side interfaith football. This has helped to break down barriers and stereotypes bringing together people from different backgrounds and beliefs.

Mentor
Michael Forbes - Gro-Organic, Chelmsley Wood
Michael has committed more than 10 years to working with the regions hardest to reach and disadvantaged young people including offenders, those at the attention of the police and on the brink of criminality. During the last three years alone, Michael has touched the lives of over 1,100 young people and has supported over 340 young people back into education, employment or training. Michael now successfully draws on his own experiences to guide and mentor people who have been through significant trauma and life challenges.

Mentee
Raheem Ali
Raheem was one warning away from being excluded from school when he joined a mentoring programme which has showed him a new way of life. However, this would not have been possible without his newfound determination and aspirations. He is now engaged at school and has even started delivering peer mentoring in his spare time. He is working towards a mentoring qualification and plans to start an apprenticeship once he finishes school.