West Midlands Cycle Hire has today brought its distinctive grey and green bikes to the streets of central Birmingham..

More than 300 bikes have today been distributed among 43 docking stations placed at key locations in and around the city centre – including bus, train and tram interchanges and popular destinations like Broad Street and Victoria Square.

This number will rise to 83 docking stations and more than 700 bikes later this year – covering an area including the city centre and stretching out towards the University of Birmingham. The bikes are being made by the renowned Pashley company in Stratford-upon Avon.

Today’s launch in Edgbaston follows successful roll outs of the scheme over the last two months in Coventry, Solihull, Stourbridge, Sutton Coldfield, Walsall and Wolverhampton. More than 14,000 people have given the bikes a go since March, clocking up more than 100,000km in the process.

Representatives of local cycling groups joined the West Midlands Mayor Andy Street and cabinet member for transport and the environment Cllr Waseem Zaffar for the launch at the University of Birmingham. There are eight docking stations on or around the campus.

The cycle hire scheme was launched by Transport for West Midlands (TfWM), part of the West Midlands Combined Authority (WMCA), to encourage more people to become active and healthy and offer a convenient and more environmentally-friendly alternative to the car for shorter journeys.

Mayor of the West Midlands Andy Street said: “It is incredibly exciting to launch our cycle hire scheme in Birmingham, and I know riders across the city have been itching to get out and try our bikes. They are already available in a number of boroughs across the West Midlands and have proven to be incredibly popular with more than 14,000 people giving them a go.

“Not only is cycling brilliant for people’s fitness and physical health, but it also helps reduce the number of cars on the road, helping us to tackle congestion, air pollution, and the climate emergency we are all facing.  I hope by making bikes more accessible for people both young and old through our cycle hire scheme, more people will make the decision to go out on two wheels and reap the benefits.”

Investment in cycling facilities is a key part of the region’s plan to encourage more alternatives to the car for shorter journeys around busy towns and cities with a view to reducing congestion, improving air quality and helping the region achieve its #WM2041 net zero-carbon target. 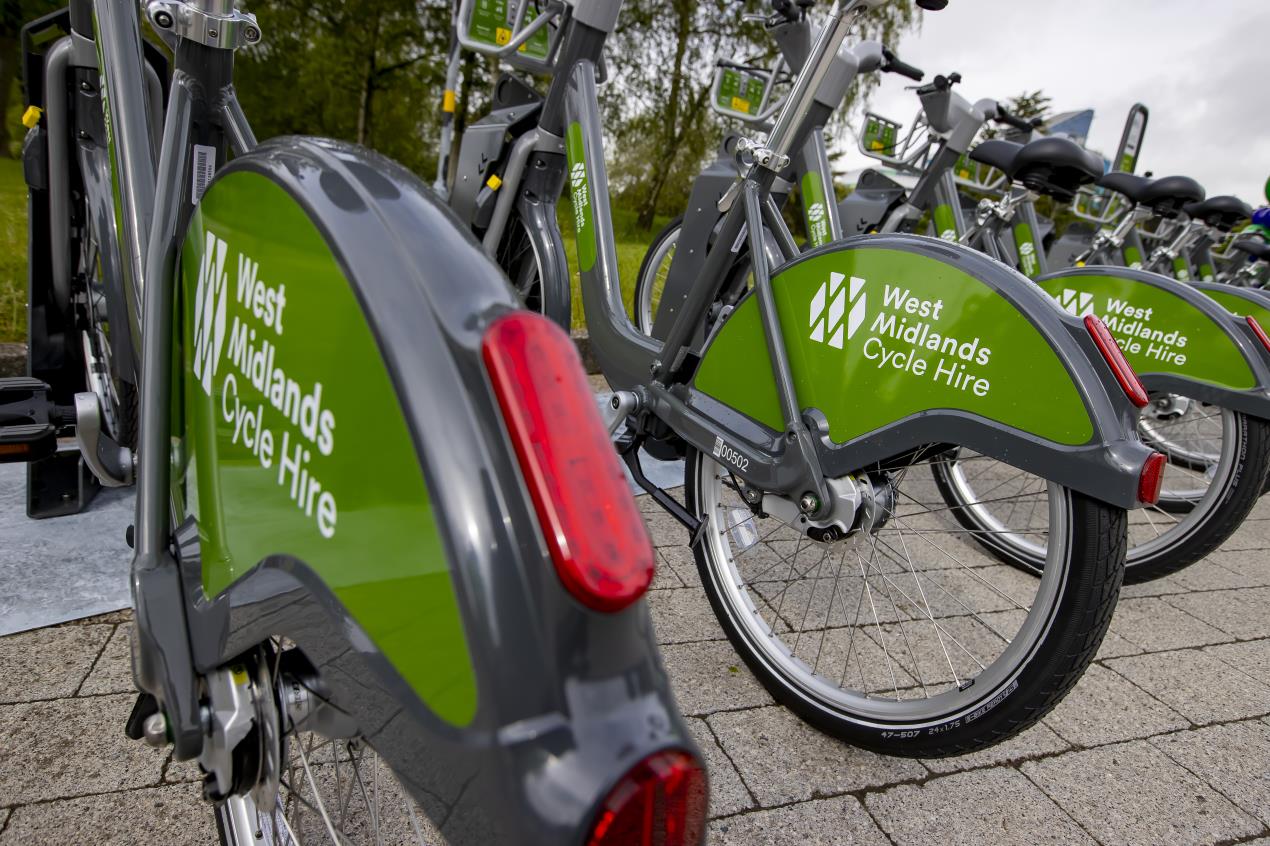 Cllr Zaffar said: “For many people living and working in Birmingham, cycle hire provides a more convenient alternative to buying a bike and, of course, it’s healthier and better for our environment.

“This scheme has the potential to open up cycling opportunities to more people, and I’m proud that in Birmingham we have a growing network of segregated cycle routes to facilitate this safely.”

When fully rolled-out later this year there will be 170 fixed docks and 1,500 bikes for hire across the region, of which 150 will be powered e-bikes. The pedal cycles have three gears to cope with hilly parts of the region and are fitted with high quality laser safety lights.

As an introductory offer everyone who signs up will get their first 30 minute bike ride for free. The normal cost of unlocking a bike is  £1 with a 5p per minute charge after that. This means a 20 minute cycle will cost £2 and an hour £4.

The five-year contract with Serco, the operator of London’s successful Santander Cycle Hire scheme, offers the opportunity for more docks and bikes to be provided as demand increases. As well as having the bikes made locally, the contract with TfWM means  the docking stations and locks are also being manufactured here in the West Midlands.

Simon Bailey, managing director of Serco’s leisure business, said: “We are delighted to be working with TfWM and University of Birmingham to launch the West Midlands Cycle Hire in Birmingham. It is the largest launch so far and follows successful roll-outs in Wolverhampton, Coventry, Solihull, Stourbridge and Walsall. The cycle scheme is already becoming part of the transport infrastructure in the West Midlands and has seen over 14,000 unique users since March.”

Professor Tim Jones, Provost and Vice-Principal at the University of Birmingham said: “A thriving public transport system is a key part of the fabric of any great city and with a community of around 40,000 staff and students, we are delighted to host six docking stations on campus.

"Before the pandemic, we know that 10% of staff and postgraduate students commuted to campus using a bike. As we continue to recover from the pandemic, we expect that to increase and this scheme offers ease-of-use, flexibility and connectivity with buses and trains.”

The bikes can be hired using the Beryl Cycle Hire app. Later this year, they will also be available via the new Swift App. This will be the first app for the West Midlands to offer ticket purchases, the Swift Collector, departure information, journey planning, car hire and more, all in one place.